Butt’s Not To Like About BBL? The Benefits of Brazilian Butt Lift Surgery

It seems like the last few years have been all about the booty. More people than ever want a curvier bottom, as evidenced by the growing number of patients turning to cosmetic surgery to get the round shape they desire.

According to the American Society for Aesthetic Plastic Surgery (ASAPS), over $100 million was spent on buttock augmentation surgery in 2018. Of these, over 90 percent were done via fat transfer, more commonly known as the Brazilian Butt Lift (BBL).

Despite its name, BBL is less about lifting and more about giving the booty a natural boost. Using an approach that sculpts and shapes as much as it enhances, more patients are seeing for themselves what BBL has to offer.

A Brazilian Butt Lift, or BBL, is a commonly used term for a fat grafting procedure where fat is transferred to the buttocks from another area of the body, resulting in a rounder, curvier bottom.

Diagram of a BBL

Dr. Alexander uses liposuction to remove unwanted fat from the body, typically from areas such as the abdomen, back, thighs, or hips, where pockets of fat tend to accumulate.

Once the fat is removed, it is put through a purification process before Dr. Alexander injects it back into the upper buttocks. Fat transfers are done at strategic locations and different depths, which ensures the fat is distributed as naturally as possible.

The procedure’s approach to buttock enhancement is twofold: by removing fat from unwanted areas, Dr. Alexander essentially contours the body to make the butt area more noticeable before the fat itself is transferred back, naturally helping to increase the volume of the buttocks.

Recovery from BBL surgery can take between six and eight weeks. There will be swelling and bruising immediately afterward, but any discomfort may be managed with pain medication and a compression garment.

Patients will be unable to sit directly on their buttocks for at least eight weeks after surgery to prevent too much pressure on the fat grafts. Strenuous activity, such as exercise, will need to be avoided for at least six weeks.

Results tend to be immediately apparent, with a visible increase seen right away. Some fat will be absorbed back into the body without any enhancing effect, and it may take up to a year to see final results. All enhancement are designed to be long lasting.

BBL and traditional butt augmentation surgery, which typically involves the use of implants to enhance butt shape, are both on the rise as more people seek a curvier bottom. But BBL offers a unique set of advantages over implants or other surgical methods: 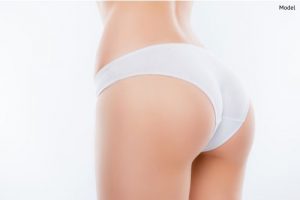 No Risk of Rejection

Traditional butt augmentation surgery uses implants to enhance the shape of the butt. While effective, implants always carry a slight risk of rejection because they are a foreign object.

Complications like capsular contracture, where scar tissue starts to harden and constrict around the implant, may occur with traditional surgery.

With BBL, these risks turn to zero as the patient’s own fat is used for enhancement. There’s no chance the body will reject its own cells as they’re transferred back.

BBL surgery tends to offer patients the most natural-looking results—largely because it uses the patient’s own fat and tissues to enhance body contours. Dr. Alexander removes unwanted pockets of fat from the body, immediately smoothing body outlines and contours.

That fat is then added back into the buttocks in a gradual, deliberate process that ensures the increase looks as natural as possible—a process that’s not always possible with traditional surgery. Implants may also slide or move over time, resulting in an unnatural-looking shape.

Both BBL and traditional butt augmentation surgery will take patients several weeks to fully recover from, but BBL may arguably result in an easier healing process overall.

Since there’s no chance of tissue rejection, BBL recovery tends to proceed faster than traditional butt augmentation. There may be no need for surgical drains, which are often needed after implants. Side effects, like swelling and pain, also tend to subside faster.

Because BBL uses liposuction for fat transfer, it essentially removes the need for added procedures to sculpt other areas of the body. Patients will only need to go through the healing process once and get a beautiful, natural-looking curvy bottom.

This entry was posted on Monday, September 30th, 2019 at 3:06 pm and is filed under Brazilian Butt Lift. You can follow any responses to this entry through the RSS 2.0 feed. Both comments and pings are currently closed.

Consultations with Dr. Alexander are by appointment only.